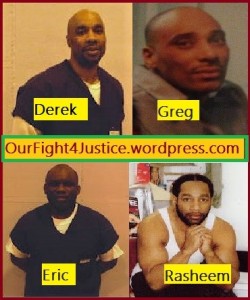 Greg Curry and Derek Cannon initiated Our Fight 4 Justice in order to gain attention for their plight of being innocently convicted after the Lucasville prison disturbance of 1993.

In their own words:

We encourage you to lend your hearts and ears to the true account of how lies and corruption lead to the conviction of innocent men during the 1993 Lucasville riot. The men were singled out and used as scapegoats because they would not lie and take part in the department of rehabilitation and corrections (DRC) broader political scheme to bilk the Ohio tax payers out of money and persuade the state to use this money for a supermax prison.
So far, for the last 22+ years the state has been successful in covering up this miscarriage of justice. There were deals and promises made to inmates for them to say anything that would help the state convict these men and many others by any means necessary.

Greg, Derek and other lifers are struggling to receive justice alongside the Lucasville 5 who were wrongfully condemned to death in the aftermath of a very injust and covered up setof lawsuits targeting people who had nothing to do with the uprising but who did NOT want to be used as an informant, or those who were negotiators for a peaceful ending and who were then tageted as being “leaders.”

There are several websites asking for attention to the terrible injustices these men have suffered and are continuing to undergo, but there is not much attention yet for the men who were condemned to life in prison on these injust court cases where the state of Ohio’s prosecutors used statements from informants and tried to hide these.

Please get in touch with Greg, Derek and others by writing them directly and offer your support, greetings, and let them know you have read of their plight.

Free Greg, Free Derek and Free all the others still incarcerated while innocently convicted!